It is our contention that British government bonds are indispensable in portfolios. Moreover they are also irreplaceable.

And in that context, British government bonds are no less indispensable following a 35-year bull market (see chart 1) and they are no less irreplaceable when longer term interest rates seem set, finally, to sustain an upward trend (see chart 2).

British government bonds, or gilts, have uniquely attractive characteristics which include:


Neither of those features are ‘time-varying’, they are unaffected by present-day circumstances. Of course, in the long-run those benefits represent something of a free lunch but carrying gilts can prove expensive over some shorter timeframes. And, looking forward, it is reasonable to expect one of the more expensive spells.

Chart 2 illustrates market-based estimates of inflation at the five-year horizon. At the start of the chart, in November 2013, market participants imagined that the Retail Price Index (which rises at a generally, but not necessarily, higher rate than the Consumer Price Index) would rise at close to 3.2 percent by the time November 2018 came about. That was before dramatic declines in the price of oil and other commodities in the latter half of 2014 and 2015. In response to those declines, market participants downgraded their expectations for future inflation by close to a full 1.0 percent and, by extension, similarly downgraded likely prevailing interest rates.

The low came in August 2016. At that time, for example, the benchmark 10-year gilt yielded a record low of 0.5 percent, having previously varied between 3.6 and 5.9 percent in the decade ending in March 2009.

Since then, commodity prices have stabilised. Indeed, a barrel of crude oil now costs $54, twice the $27 bottom in January this year. Additionally, the pound has plummeted. Accordingly, estimates for future inflation rates have rebounded, and at quite some pace. Early in December, the 10-year gilt yielded 1.5 percent, thrice the August rate. In other words, longer term interest rates have already moved markedly higher. That provides us with an opportunity to process some of the losses that are the counterpart to a dramatic rise in interest rates (prices and yields head in opposite directions).

Looking at the chart, I am immediately struck by the wide range of returns. A range of 12.8 percent (from +0.8 percent to -11.9 percent) is indicative of a significant degree of variation across the market. Subsequently, my eye is drawn to a near 12.0 percent decline in the value of those gilts with a term to maturity which exceeds 15 years. That stands in stark contrast to a loss of just 0.7 percent in the value of gilts with a term to maturity of less than 5 years. I also notice that corporate bonds with a lower credit rating (so called ‘high yield’ bonds) have gained, not fallen, in value. What is clear is that not all bonds are alike.

The movements described in Chart 3 do not surprise me. In fact, they demonstrate the success of an old, tried-and-tested strategy for dealing with rising interest rates. That strategy pairs short-term government bonds with high yield corporate bonds. That is why we are surprised when commentators, fund managers and asset allocators advocate a wholesale disposal of bond investment allied with predictions for rising interest rates. It seems to me that such a course of action is unnecessary in the first instance and, from a certain perspective, imprudent in the second. Your author is even more underwhelmed where discretionary fund managers in particular but structured investments pegging returns to the FTSE100 or All Share thereby increasing correlation of returns or losses.

Admittedly, you may choose to shift your bond exposure in line with some forecast of interest rate movements only if you are willing and able to take an ‘active’ asset allocation position. Some attempted overweighting short ‘duration’ in 2015. With the benefit of hindsight, that is earlier than might be judged optimal, given the August 2016 low point. In any case the short-duration position is one which should be held for as limited a period as is possible because it necessarily reduces the diversification benefits associated with government bond exposure. And there is no reason why a large and protracted period of equity market drawdown might not start tomorrow particularly given the political tensions that are playing out across most of the developed world. Still, reduced diversification is better than no diversification.

Those with an inclination toward a static or ‘passive’ asset allocation style will remain invested more broadly. 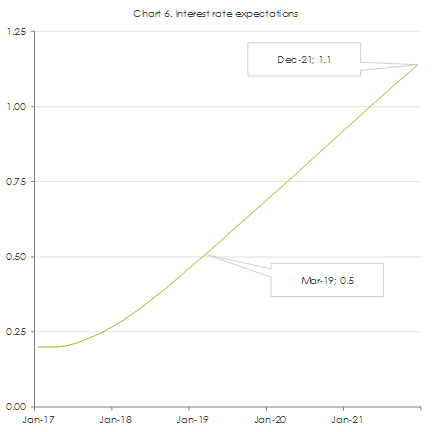 Chart 4 is representative of a typical broad mix of bond investments, inside portfolios which are broader still. It comprises conventional gilts, index-linked gilts and corporate bonds. As a rough guide – a very rough guide – we expect that mix of bonds to capture 60 to 70 percent of movements in the broader market for British government bonds.

Over the period 11.08.2016 to 01.12.2016 that mix of bonds lost 3.6 percent (see chart 5). All things considered, we do not regard that as being overly dramatic. Particularly as it coincides with a 1.7 percent gain in equity prices, meaning that a 50-50 bond-equity split would have seen a portfolio decline by less than 1.0 percent.

But that was then, this is now and longer-term interest rates might not rest at 1.5 percent. Indeed, we think it likely that they will head higher to some extent.

Chart 1 demonstrates the close relationship between gilts and the equivalent US government bond. That’s important because we have little doubt that the Federal Reserve is committed to raising the Fed Funds rate as and when economic momentum allows. The most recent summary of economic projections implies that members of the Federal Open Market Committee see the main rate of interest rising to 3.0 percent over the next few years. If that is correct, and further assuming that the 10-year US treasury yields 1.0 percent over the Fed Funds rate, we could see longer-term rates in the US rise from around 2.4 percent today to 4.0 percent in 2019 – a rise of 1.6 percent. If the yield attached to the 10-year gilt were to track that trajectory, we would see longer-term rates in the UK rise from 1.5 percent to 3.1 percent.

A generalised rise of 1.6 percent might encourage a loss of something like 16.0 percent for the average gilt fund and an aggregated 6.0 percent across the broader mix of bond funds illustrated in charts 4 and 5.

Having said that, we consider the losses identified as being located on the upper limits of what we are likely to see. In the UK, bond market participants expect Bank Rate to remain at 0.25 percent for another two years before gliding gently toward 1.25 percent three years later. Even accounting for a healthy margin of error, it seems unreasonable to assume long-term interest rates climb as high as 3.1 percent in the next few years. In addition, it’s difficult to ignore the Bank of England’s resumed asset purchases (otherwise known as Quantitative Easing or QE) which are, necessarily, intended to hold down longer term interest rates.

Remember too, that the loss we identified in our exercise is manifested over two or three years and will be compensated, to some extent, by income receipts. But also given that Equities tend to go up when Bonds go down, the remaining net loss is likely to be more than offset by gains elsewhere in the portfolio.

We are of course as sensitive to losses as the next man (if not more so given the scale of client assets under management!)  but it remains our contention that selling bonds outright might limit relatively contained losses on bonds, but it will do so at the expense of the potential for much larger losses during the kind of sustained downturn we last saw in 2008. Diversification is a free lunch. But its benefits are most apparent in the long term, provided investors are disciplined enough to maintain that diversification during periods when it appears expensive.

Although the information contained in this document is expressed in good faith, it is not guaranteed. Fairey Associates Limited will not accept liability for any errors or loss arising from the use of this document. The value of your investments can go up and down.

This article is for information only purposes. Should specific tailored financial advice be required please contact your Independent Financial Adviser.